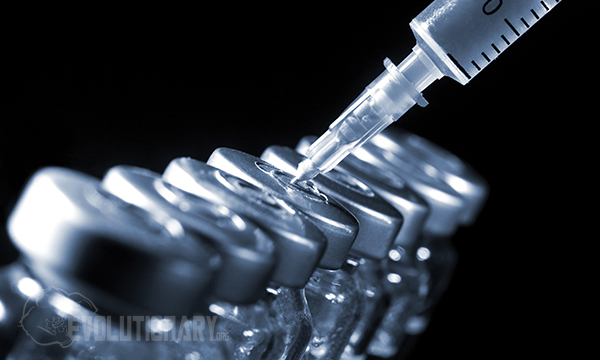 The subject of anabolic steroids can raise society’s bristles as the substances are associated with harmful and deadly side affects.  Not only that but they’re illegal.  Recently, however, a team of researchers has discovered a possible positive use for the drug and that is to help build muscle for people thus preventing loss of muscle called atrophy.

In some diseases or afflictions, the body’s muscle tissue can be consumed by the body itself due to lack of exercise and movement.  Bedridden people suffer the most but also accident victims and even astronauts.  Astronauts exist in an environment with no gravity thus their muscles start fading away.  This new research might be able to combat that problem along with the astronaut’s ability to use specific exercises to combat atrophy.

What basically happened is the researcher sussed their lab rabbits in the experiment.  They bandaged up one hind leg of the animals and with some they used steroids on and the others they used a placebo of just sesame seed oil.  The animals’ leg was not being used by the animal and the researchers just sat and waited to see the results.

Lo and behold after intervals of several weeks, they were able to detect that the rabbits with the steroid injections did indeed grow stronger muscles and suffered no atrophy whereas the animals receiving the placebo did suffer muscle loss.

Previously it was believed by scientists that anabolic steroids would not work if the subject didn’t exercise.  This new series of findings proves otherwise.  It was in an issue of “The American Journal Of Sports Medicine” 1 that the research was reported.

Senior researchers of the study knew of the risks and the controversies associated with anabolic steroids and they also didn’t expect it to work so well.  They had expected that the drugs would add a bit of muscle or somewhat slow down the process of atrophy but the direct opposite occurred.

Researchers had believed that anabolic steroids would only work if a person exercised and ate well.  Not the case in this experiment which has potential wide implications for people suffering from a variety of conditions as well as people like astronauts who need help in retaining muscle.

Although these results appear promising, researchers caution that not only is it going to be some time before it’s tested on humans, but also that people shouldn’t expect to turn into muscle bound bodybuilders 2 while sitting on their butts.  In addition they focus on the dangerous possible side affects of these substances.  It will take time for further researchers to see how to better apply the drugs to get the best results, but to avoid or minimize the possible side affects.

Using steroid alternatives that are legal is also becoming a trend, and might be the solution to avoid serious side effects.

If future research and application pans out, people who are wheelchair or bed bound can get an extra treatment that will prevent or minimize muscle loss and thus making recovery go faster and safer.

Hopes class with conflicts arise as doctors see the potential benefits yet also see the possible harm.  For sports injuries or combat injuries that require many casts and lengthy convalescence in beds and wheelchairs, having these steroids administered could mean better recovery and saving money, however there could be more expense for smaller injuries if the techniques proliferate as a general treatment.  They also want to emphasize that there will be more research needed and patience.  It’s not to be assumed by the public that using these drugs will make them into supermen, but that if all works out it will be a prescribed treatment only in specific cases.

Perhaps a benefit will be to the elderly.  They lose a great deal of muscle mass and can use something like this.  It will be  awhile before we find out a s it takes years o testing and FDA approved clinical trials, but if it works well then it could possibly allow seniors to get up and about and enjoy activities such as sports and general around the house chores.  Having that extra bit of muscle could allow seniors to be more active and prevent the numerous other diseases and afflictions that come with age and sedentary lifestyles.

It will be like a breath of fresh air if this research leads to helping combat veterans and accident victims.  With the constant military engagements around the world and the multi billion dollar sports industry, tens of thousands of people suffer from injuries and accidents that leave them unable to move about.  They end up sedentary and begin to grow fat and lose muscle and bone density.  This research could well be what the doctor ordered and allow for the prevention of muscle loss and prevention of sedentary associated afflictions, and also allow for quicker recovery.

Humans aren’t the only ones to benefit from this research.  It’s a good bet that the proven success on rabbits can be applied to livestock and pets and thoroughbred animals who suffer injuries where they would have to be sedentary and lose muscle mass.

Everything depends on how research goes from here on out.  Researchers will have to look at what best promotes the retaining and growing of muscle, as well as to what factors help to contribute to the process’ success.  How much will diet and any exercise contribute to further success and what medications, if any, will be needed.  Will further research discover new benefits or detriments will have to be prepared for.  In the end it all depends on doctors’ findings and evaluations.  If it works, the world will have beaten another medical problem and that’s all right.